Much awaited Pakistan Super League is kicking off on 4 February, 2016 with an opening game between Islamabad United and Quetta Gladiators at Dubai International Cricket Stadium. The live broadcast and telecast of HBL PSL 2016 will be aired around the globe through various broadcasting networks. 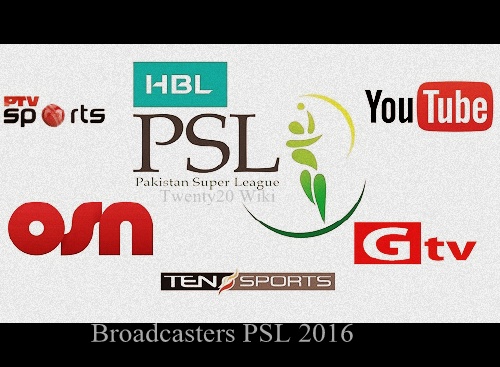 There will be total 24 matches played in the opening edition of Pakistan Super League which will be hosted in United Arab Emirates. Dubai International Cricket Stadium and Sharjah Cricket Stadium will host the PSL 2016 matches.

Geo Super, PTV Sports and TEN Sports are the official broadcasting networks in Pakistan which will telecast live t20 cricket matches of PSLT20 from 9:00 PM PKT. On the double header game the broadcast will begin at 4:30 PM as per Pakistan timings.

UAE based viewers will also be able to catch the live action on OSN whereas Bangladesh based fans can watch the matches on Gazi TV. Prime TV will be telecasting live Pakistan Super League matches in United Kingdom.

Unfortunately India based fans won’t be able to catch the live coverage of matches as there is no official broadcasting network in India to air live Pakistan Super League. But don’t fans don’t need to get disheartened as espncricinfo and cricbuzz will provide the latest updates and live scores of HBL PSL 2016.